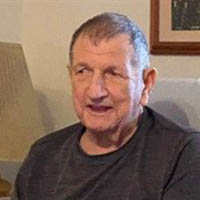 Jimmy Ray Smith, 74, of Riner, VA passed away on Thursday, March 4, 2021. He was born in Montgomery County VA ton December 1, 1946 to the late Alfred V. and Anniebell Eanes Smith. He was also preceded in death by his sister, Phyllis Hall.

Jimmy attended Alleghany District High School, and served in the United States Air force (A1C) during Vietnam, and was a truck driver his entire career.

The family would like to express a sincere thank you to Amedysis Hospice Staff, Carmaletta King, Debbie Taylor, Oceanna Cruise, and Sandra Bane, the doctors and oncology/hematology staff at the VA Medical Center Salem as well as Dr. Farhad Sahebjam.

The family suggests that donations be made to the VFW, National Coalition for Homeless Veterans, or UVA Cancer Research for Kids.

A memorial service will be conducted on Monday, March 8, 2021 at 6:00 pm at the chapel of Horne Funeral Home and the family will receive friends prior to the service beginning at 4:00 pm.