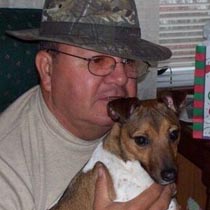 Eria Alton Smith, “Stinkey”, 74, of Pearisburg, departed this life Saturday morning, March 26, 2016, at his home. Born in Giles County on February 10, 1942, he was a son of the late, Eria A. and Lilly Hare Smith. He was retired from RAAP with over 30 years service, loved the farm work on his land, and especially liked spending time with his grandchildren.

He was preceded in death by his sister, Linda Radford and his brothers Jerry, Calvin, Lynwood, and Donald Smith. He leaves to cherish his memory his devoted wife of almost 50 years, Connie Thompson Smith; his daughters and sons-in-law, Kristi Smith Prillaman and Ronald of Salem, Erika Smith Reynolds and Adam of Pembroke; his grandchildren Wren and Lark Prillaman, Mason, Madison, and Payton Reynolds; his sisters and brothers-in-law, Margaret Price of Pembroke, Bonnie Mitcham of Blacksburg, Judy and Ronnie Raines of Newport; his mother-in-law, Dorothy B. Thompson of Salem; his special canine companion, Lexi; his sister-in-law, Joyce Skinnell of Richmond and many nieces and nephews.

Funeral services will be conducted Tuesday, March 28, 2016, at 2 p.m. in the Kendall Funeral Home in Pembroke. Burial will follow in Birchlawn Burial Park in Pearisburg. The family will receive friends at the funeral home Monday evening from 6 until 8 p.m.

The Kendall Funeral Home in Pembroke is in charge of arrangements. Online condolences may be sent by visiting kendallfuneralhome.com, 540-626-7221.