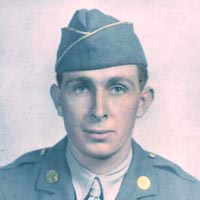 Charles Robert Smith, 98, of Copper Hill, passed away peacefully at the Salem VA Medical Center on Wednesday, September 2, 2015, his 65th wedding anniversary. He was preceded in death by his parents, Robert Washington and Lou Cassie Smith and three brothers, Sherman, Wilbert and Sam Smith.

Robert was born March 30, 1917 in the Huffville section of Montgomery County, the third of nine children born to Robert “Bob” and Cassie Smith. He grew up on a farm in Floyd County during the depression where he developed a strong work ethic and sense of frugality and responsibility that remained with him throughout his life. He loving working with animals and fondly spoke of plowing with horses and oxen when a boy. During his young adult life he helped build the Blue Ridge Parkway in the Copper Hill section of Floyd County. When his country called in January of 1942 Robert entered the United States Army and completed basic training and cavalry school at Fort Riley Kansas and desert warfare training at Camp Coxcomb in the California desert. He arrived in Scotland in March of 1944 and entered the European Theater of Operations after landing on Utah beach in July of 1944 as a member of the 17th Cavalry Reconnaissance Squadron with George Patton’s Third Army. He served in four major campaigns in Europe: Normandy, Northern France, Rhineland, and Central Europe. After the war Robert came back to Floyd County and soon went to work for the Norfolk and Western Railroad where he worked until his retirement 34 years later.

Robert was a member and Deacon of Thompson’s Grove Primitive Baptist Church in Roanoke County. He loved his church very dearly and always looked forward to church meetings. He would always make an effort to greet each person individually and he loved the fellowship that he had with them.

The family would like to recognize the wonderful care and especially the kind compassion that he received from Dr. Don Brady of Carilion Clinic. The family would also like to recognize the exceptional care and compassion that Robert received from the medical staff in the Palliative Care Unit of the Salem VA Medical Center. The loving care that these wonderful, compassionate people gave to him in his final days was a huge comfort to him and his family as Robert ended his journey in this life.

Funeral Services will be conducted at Head of the River Primitive Baptist Church in Copper Hill, at 3 p.m. on Saturday, September 5, 2015 with Elder Junior Conner officiating. Burial will follow in Restvale Cemetery with full military honors by Floyd VFW Post 7854 and American Legion No. 127. The family will receive friends from 2 to 4 and 6 to 8 p.m. on Friday, September 4, 2015.