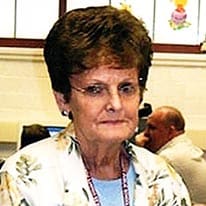 obbie Sue Reed Skeens, 84, of Pearisburg, VA went to be with the Lord on Tuesday, November 16, 2021, at her home. Bobbie was born on August 26, 1937, in Lovern, WV and was a daughter of the late Carvel Richard Reed and Relda Rose Wiley Reed. Besides her parents, she was preceded in death by one brother, Richard Allen Reed and one sister, Gypsie Dean Reed. Bobbie taught school for 29 years at Narrows Elementary and loved every minute of it. Her greatest joy was her family. She also loved her flowers and working in her flowerbeds. She is survived by her husband, Charles Jackson Skeens of Pearisburg, two daughters, Teressa (David) and Sheila (Dave), two sons, Randell and Chuck (Jeff), one sister, Libby (Wayne), 5 grandchildren, five great grandchildren and numerous nieces and nephews. Funeral services will be conducted Friday, November 19, 2021, at 2pm at the Givens Funeral Chapel in Pearisburg with Pastor Aubrey Whitlow officiating with burial following in the Birchlawn Burial Park in Pearisburg. The family will receive friends at the Givens Funeral Home Thursday evening from 6 – 8pm. Memorial donations may be made to the charity of your choice. Online condolences can be sent to the family at givensfuneralhome.com