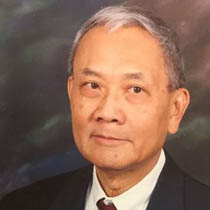 He is survived by his wife, Lovia Carvalho Siochi of Blacksburg, VA; his daughter, Lucia Siochi and son-in-law, Wayne Jones; his sons and daughters-in-law, Antonio and Emilie, Fernando and Cristina, Alfredo and Ann, Octavio and Jacqueline; his sisters, Amelia Claridades and Carminia Lopez; and his grandchildren and their spouses, Leana Siochi and Drew Wright, Anmar and Melissa (Woo) Siochi, James Michael, Jeremiah, Katherine, Misty, Andrea, and Christian. Andy met the love of his life, Lovia, while completing his graduate studies in Virginia.

He ran many successful businesses in the Philippines and in the United States. He was extremely well versed in a wide range of subjects, yet he was exceedingly humble. He was compassionate, with a deep sense of mission for the poor. In this he was guided by Matthew 25: 34-40. He established a number of initiatives to lift the poor out of poverty while bolstering their sense of dignity. He believed in education as a vital part of that mission.

Funeral Mass will be celebrated at 11 a.m. on Saturday, April 2, 2016 at St. Mary’s Catholic Church, Blacksburg, VA. The Rev. Remi Sojka will be the main celebrant. Committal and interment will follow at Westview Cemetery, Blacksburg, VA. Visitation will be immediately prior to the funeral service from 10 to 11 a.m. at St. Mary’s Catholic Church. A reception will follow the committal and interment.

In lieu of flowers, memorial contributions may be made to your favorite charity that supports the poor.

This the day the Lord has made, let us rejoice and be glad.