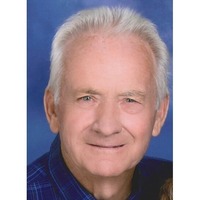 After serving in the U. S. Army during the Korean conflict, Erby began a successful career working in the construction industry where he acquired the reputation of being a perfectionist with his work. He was the oldest and longest member of the Snowville Masonic Lodge #159 A.F. & A.M.

Erby was of the Christian faith and was a member of Snowville Baptist Church. He always had a passion for hunting and was also a lifetime member of the Botetourt Hunt Club where he had many good friends and always looked forward to spending time with them. After retirement, Erby enjoyed going to the Radford truck stop every morning for breakfast and visiting with his friends there.

Like many men from his generation, Erby was a no nonsense kind of guy and was always stern, but to the people closest to him and especially his wife and kids, he was a loving husband and father who was incredibly proud of his family and loved them immensely.

Survivors include son, Kirk Anthony Simpkins of Snowville; sister, Donna Wilson of Radford; and many other relatives and friends.

Funeral services will be held at 11 a.m. on Monday, October 18, 2021 at the Mullins Funeral Home in Radford with Rev. Neil Wood officiating. Interment with full military honors will follow in Highland Memory Gardens in Dublin.

The family will receive friends from 5 until 7 p.m. Sunday evening at the funeral home.

Flowers will be appreciated or contributions may be made to Snowville Baptist Church or to the Snowville Masonic Lodge #159 A.F. & A. M.

The Simpkins family is in the care of Mullins Funeral Home & Crematory in Radford. www.mullinsfuneralhome.com