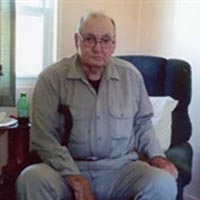 Walter James Simmons, of Riner, age 89, left his earthly body on Saturday, April 18 at Montgomery Regional Hospital. He was born to Lertie and Minnie Simmons on March 17, 1931.

He is survived by daughter and son-in-law, Peggy and Gary Linkous of Blacksburg; grandaughter and husband, Jennifer and Jason Scott of McCoy; great-grandchildren, Skylar Scott and Lyla Scott, McCoy; nephew and spouse, Richard and Collen Simmons, of Riner; nieces and spouses, Carolyn and Ron Winfrey, Bluefield, WV and Janet and Jim Caldwell of Christiansburg.

“Waldo” or “Smokey”, as many of his friends and co-workers knew him by, was retired from Lynchburg Foundry in Radford, Virginia, but also worked for much of his life for Teel Farms in Riner, Virginia. He also held various truck driving jobs through the years. He considered all the folks at Riner Food Mart, where he liked spending time, as family and good friends.

The Simmons family appreciates the friendship those folks offered him and would also like to especially thank Mr. Gene “Bull” Teel for his special help and friendship over the years.