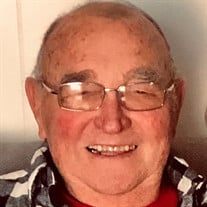 Richard Simmons, 82, loving husband, father, pawpaw, and friend, got his wings and joined his son and other family members in heaven on August 28, 2021.

Richard was a hard worker but he was never too busy to lend a hand to anyone in need. He served 4 years in the US Air Force and 13 years in the Virginia National Guard. Richard worked at the Radford Arsenal for 32 years and was a bus driver for Montgomery County Public Schools for 22 years. He was a persistent problem solver and his mechanical inclination made it so that he could fix just about anything. Richard was a selfless man that was very devoted to his family, community, and his country. He will be deeply missed.

He was preceded in death by his parents, George & Ardith Simmons and son, Shane Simmons.

Please come and pay your respects to Richard on Tuesday, August 31 from 11 a.m. to 1 p.m. at Horne Funeral Home. The family will not be present. There will be a private family service at a later time. Richard will be laid to rest at Sunset Cemetery.