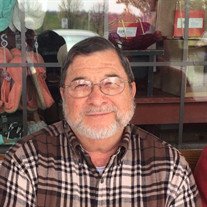 He was a devoted and loving husband, father, grandfather, friend and neighbor. He was a committed member of Morgan’s Chapel United Methodist Church and more recently, Fairlawn Baptist Church, where he enjoyed singing in the choir. Eddie Sr. believed in sharing the gospel in word and deed, and did so regularly. He was always willing to help others, especially with home, car and equipment repairs. He enjoyed hunting, fishing and spending time outdoors, most of all at the family hunting cabin with family and friends. He will be greatly missed by many, but in true Simmers fashion, the stories of Eddie Sr. will live on through those who love him.

Funeral services will be conducted Saturday, April 17, 2021 at 2:00 pm in the Fairlawn Baptist Church. Entombment will follow in the Highland Memory Gardens. The family will receive friends from 1-2:00 pm prior to the service at the church. Arrangements by McCoy Funeral Home, Blacksburg.