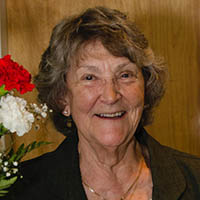 Mrs. Thelma May Walters Shupe passed away peacefully on October 24, 2019 surrounded by her loving family. She was born in Wytheville on February 25, 1935 to the late Robert L and Frances Elizabeth Walters, Wytheville, VA. She is preceded in death by her brother, Cecil Walters; and her daughter, Sherry S. Clark.

The family would like to thank the wonderful employees of Carilion Clinic Hospice, Dr. Benjamin Davidson and Linda McDaniel who made it possible for us to keep her at home with their little dog, Poppy, by her side.

Her whole life was dedicated to her family and her church. As one of her grandsons wrote “Memaw will always be loved, and live in our family’s hearts forever”. She truly enjoyed time with family and friends and was alway very generous and kind to all.

In lieu of Flowers, donations can be made to First Christian Church, 524 Jefferson Avenue N. Pulaski, VA. 24301