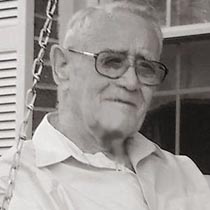 Granville Carr Shrader, 88, of Narrows passed quietly into the presence of Jesus on Friday, February 5th, 2016. He was born in Narrows on March 4th, 1927, and was the son of the late Fitzhugh Lee and Flossie Glade Fizer Shrader.

Granville joined the Army Air Force in 1945 and served as a corporal in the Pacific during World War II. He was a member of the VFW Post 6000. After the war, Granville became a Christian and was baptized at Calvary Baptist Church in Bluefield, West Virginia. He then returned to Narrows where he met his bride, Donna Thorne, while he was driving a bus for the Celanese Corporation. They married December 4th, 1948.

Over the years Granville worked as a mechanic and a welder. He was part of the crews that built both the East River and Big Walker Tunnels. Later he worked as a pipe fitter for the Celanese. He retired in 1991.

An avid gardener, Granville had a garden every year to the end. No garden was complete without rows of beans, potatoes, zucchini and 20 or so tomato plants. Granville was a kind and gentle spirit who never met a stranger. His family adored him, and over the past few weeks many visitors have dropped by to visit him during his short illness at the Carilion Giles Community hospital to share pleasant memories.

He was preceded in death by his father, mother, beloved Aunt Lizzy Burton, and four brothers: Arthur, John-Allen, Arnold and Verlin.

Funeral services will be held Monday, February 8th, 2016 at 2 PM at Riverview Baptist Church in Ripplemead with Pastor Shahn Wilburn officiating. Burial will follow in the Shrader Cemetery on Wolf Creek Road outside Narrows with graveside rites conducted by VFW Post #6000, American Legion Posts #68 of Narrows, #311 of Pembroke, and #145 of Peterstown. The family will receive friends at Riverview Baptist Church Monday from 12 noon until just prior to the service.