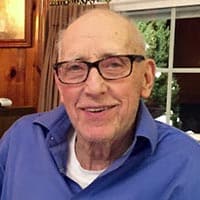 Roger Shortt, 94 years old, departed this life on May 13, 2019. Roger was born in Floyd, Virginia, on January 7, 1925, to Amos Benjamin and Callie Barton Shortt. Predeceasing him were his parents, his son Roger Ward Shortt, and his brothers and sisters-in-law Wilson and Ola Shortt, Ward Shortt, Jack and Madeline Shortt, and Diamond Shortt.

He is survived by his wife of 70 years Margie Sweeney Shortt, sons and daughters-in-law Richard and Betsy Shortt of Bowling Green, Virginia, James and Stephanie Shortt of Floyd, Virginia, and daughter and son-in-law Ann-Margaret Shortt and George Slusher of Floyd, Virginia. Also surviving are grandchildren and spouses Scott and Theresa Shortt, David Shortt, Samuel and Lindsay Shortt, Jonathan Shortt, Jameson Shortt, Reuben Slusher and Daisy Slusher, and great grandchildren Addison, Jozef and Atlee. He is also survived by his sister-in-law Sylvia P. Shortt and many nieces and nephews.

Roger was a 1943 graduate of Floyd High School and served in the U. S. Army Combat Engineers Division from 1943 to 1946 in England, Germany, and France. He was employed by General Electric for 30 years and was a member of Little River Baptist Church where he served as Deacon and Superintendent of Sunday School. Roger leaves behind many cherished memories for those who loved him in the Roger Road community, Little River Baptist Church membership, the Floyd VFW and the American Legion.

Funeral services will be held at 11:00 a.m. on Friday, May 17, 2019 at the Little River Baptist Church with Pastor Roy Turpin and Pastor Bradley Turner officiating. Interment will follow in the Jacksonville Cemetery with Military Rites by the Floyd V.F.W. Post #7854, American Legion Post #127, and the Army National Guard. The family will receive friends from 6 – 8 p.m. on Thursday, May 16, 2019 at the Maberry Funeral Home Chapel.