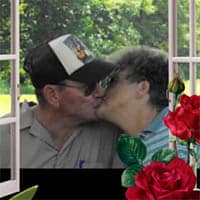 Funeral services will be conducted Monday, June 10, 2019 at 2:00 pm in the McCoy Funeral Home Chapel. Interment will follow in the Highland Memory Gardens, Dublin.

In lieu of flowers memorial contributions may be made to the Alzheimer’s Association 3959 Electric Rd., Suite 357 Roanoke, Va. 24018. The family will receive friends from 1-2:00 pm Monday prior to the service at McCoy Funeral Home 150 Country Club Dr. SW, Blacksburg.