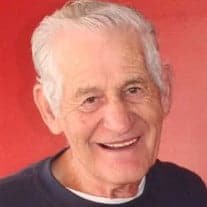 It is with a heavy heart and great sadness that we announce the passing of Alvin McKinley Sheppard of Christiansburg Virginia, who passed away on January 4th, 2022. He departed this world leaving behind a collection of useless items obtained from local auctions, mailbox flyers and As Seen on TV infomercials-consisting 9 Bionic Ear pieces, numerous mounted animal trophies and carcasses, 244 “winning” sweepstake letters, 14 tubs of Flex Seal products, 6 toilets with mismatched seats, one FlowBee Precision Hair Cutting System, one box of moth-eaten faux fur stoles, one dozen hand knitted nose warmers, 2 bonnet hairdryers complete with hose connectors and snap on curlers, 4 Clapper switches, numerous boxes of non-operable kitchen gadgets, and one prosthetic leg that could prove helpful in the event of an unforeseeable mishap.

Alvin was born on February 9, 1932, to Daniel and Sadie Sheppard in Merrimac Virginia. Eldest of his siblings Rosetta, Skip, Emmet and Leroy, Alvin said he was the “well behaved one- claiming his lips never touched a sip of alcohol nor met a cigarette because he found Jesus”- but it is suspected that Jesus found him while washing dishes with an angel that caught his eye at the Appalachian Pentecostal Holiness Church Conference. During his time at the conference, he grew closer to Jesus and even fonder of this angel Betty.

Betty lived 200 miles away in Caldwell, West Virginia and Alvin didn’t have a car but that wasn’t going to stop him from seeing her again. Alvin obtained a job at the Radford Army Ammunition Plant- under the false pretense that he was of draft age, telling the interviewer he forgot to bring his draft card with him and somehow managed to talk himself into a job making $1.50 an hour when he was barely 17 years of age. Payday came and he donned his best trousers, slicked back his hair with Bryl Crème sheen and started hitchhiking.

Upon making his way into the town of Caldwell, his journey was far from over, as transportation into the back woods of West Virginia was not easy to come by. He continued walking for miles up a railroad track, around several winding trails-thinking he was lost he started to turn back he found Jesus- or rather a sign sent from above- billowing smoke from a chimney peering thru some trees in the valley. He continued walking following Jesus all the way to the little white shack where he charmed his way into the heart of Betty and her family that day. On September 22, 1952, they were married at the Caldwell Pentecostal Holiness Church.

After moving to Christiansburg, Alvin continued “finding Jesus”- often by being dragged by his 4’10” angel to the altar at the Vicker Pentecostal Holiness Church- a place where they both frequented with the birth of their first four children Queena, Angela, Alvin Jr. and Joey. It was in the early years that Alvin independently built a house based on an image in his head and with the sweat of his brow he quite possibly assembled four walls and a roof with duct tape, fix-a-flat and or rubber cement. Around 20 years later came the birth of two more daughters Sonja and Misty, finding more of Jesus was needed after 40 years of marriage with children in a house that Alvin built.

Over the years he reinvented himself using the infamous “As Seen on TV Flex Seal products, excelling in his home improvement skills and “Taking it to the Max” he became the “unofficial spokesperson”-and standing behind that so called “Handy Man in a Can” Alvin brushed, sprayed, dipped and rolled it on everything. Flex Seal Liquid, Flex Seal Putty, Flex Seal Glue, Flex Seal Paste and Flex Seal Tape were the answer for everything- from roof to floors to the kitchen sinks and drawers; reattaching car mufflers and doors, fixing shoes, eye ware and open cuts and sores.

Alvin retired from Hercules after 46 years, trading in his badge and timecard for a license to hunt, fish and dig ginseng any time he wanted. He hiked all over the Appalachia digging and drying those roots of “gold” selling it to fund his hunting and fishing adventures -in addition to keeping up his Flex Seal inventory. He could hang with the best of hunters- once mounted one of his greatest kills on the bedroom wall above their bed- and oh what a “come to Jesus” moment that was-he found himself on his knees at the foot of his angel and barely surviving on a “Yea though I walk thru the valley of the shadow of death” prayer.

Over the years he learned many lessons about love-specifically how to make your wife feel special-that when first married buying 2 miniature toilet figurines labeled “His and Hers” from the Pilot Mountain Souvenir shop was an appropriate gesture of new love, however giving the love of your life a porcelain toilet from Lowes for her birthday years later was not. He realized he needed more of Jesus every day and found most complaints… or rather-prayers were best whispered or spoken under his breath. Although he never quite mastered the ability to hold his tongue- he did have a special talent in which he could touch the tip of his nose with his tongue.

Alvin found Jesus heard those whispered prayers and that holding your mouth “just right” led to peaceful nights and bountiful catches of catfish at dawn. It was not only Jesus who answered his soft-spoken prayers but even the fish seemed to be drawn to his whispers. Alvin whispered a tune that drew the largest of catfish and musky from the depths of the New River. Holding his mouth “just right” the “Fish Whisperer” reeled the biggest of catches into his boat that undoubtedly was being kept afloat with the can of Flex Seal Liquid Rubber he kept tucked in his tackle box.

There are no words that can truly pen who Alvin was and how much he meant to those who knew and loved him. He didn’t have a lot when he came into this world but what he made out of this life was much more valuable than money and material things. He made the most out of whatever life dealt him-reinventing ways to make even the most impossible task come together. He was dedicated to his wife and his family- finding he always needed more of Jesus both in the good times and in the bad- which speaks for a marriage lasting 70 years and an abundance of offspring without criminal records. He was a hard worker, honest and dependable- unlike the numerous clunkers he drove over the years. He gave his time and money to those in need. He was kind and hopeful and trusted everyone in this world was the same. He left this world never receiving his winning check from Publisher’s Clearing House, but I am certain he received riches that far exceeds any sweepstake reward and he is now in the presence of Jesus rejoicing waving his family onward.

The family would like to invite family and friends to a Celebration of Life on January 15th at the Fairlawn Church of God (7858 Peppers Ferry Blvd Fairlawn, Va 24141). Visitation from 2pm -5 pm, Service begins promptly @ 5pm. Flowers and condolences can be sent directly to the church. Monetary donations can be made in lieu of flowers and will be used to reduce the excess burden of medical debt and burial expenses.