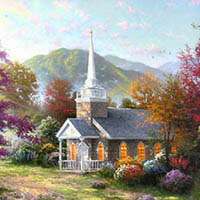 “Who can find a virtuous woman? For her price is far above rubies. Her children arise up and call her blessed; her husband also, and he praiseth her.” Proverbs 31: 10, 28.

Jocell “Jody” Garnett Shrader Shepherd went home to be with her Lord on Sunday, August 2nd, 2009.

A lifelong resident of Giles County, Jody was born on May 23rd, 1930 at Chapel, Virginia, to the late Joseph Martin and Ada Virginia Leftwich Shrader. In addition to her mother and father, Jody was preceded in death by her brothers, Burman and Roy Shrader; her sisters, Myrtle Martin, Irene Wills and Evelyn Bailey; a daughter-in-law, Janet Shepherd; and a son-in-law, Bill Martin.

She is survived by her loving husband and best friend of 63 years, James W. Shepherd of Narrows. Left to cherish their mother’s memory are her children, Barbara “Bobbie” Martin of Narrows, Jerry Shepherd and wife Patty of Maryville, Tennessee, and Eddie Shepherd and wife Heida of Tobaccoville, North Carolina. Remembering their grandmother are Christie and Bennett Sowers of Pearisburg, Cherie and Will Fenne of Aylett, Virginia, Keith and Raynel Shepherd of Townsend, Tennessee, Joshua Shepherd and fiancee’ Jerica Hopkins of Maryville, Tennessee, Roger and Fawn Shepherd of Pearisburg, Sherry and Stuart Davis of Christiansburg, Corky and Kim Franklin of Nashville, Tennessee, April Johnston of Tobaccoville, North Carolina, and Michael Johnston of Winston-Salem, North Carolina; fifteen great-grandchildren, three great-great grandchildren, and many special nieces, nephews and cousins.

The family requests that those sending memorial contributions, please consider making a donation to the building fund at Kathleen Memorial United Methodist Church. Donations may be mailed to the attention of Bobbie Ratcliffe; 2001 Old Wolf Creek Road; Narrows, Virginia 24124.