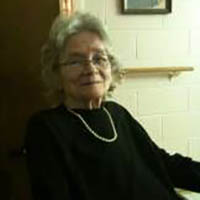 Betty Rae Shelor Shelor, 81, of Roanoke, formerly of Lynchburg, passed away Tuesday, March 15, 2011 with complications of a long bout with arthritis. She was born on January 25, 1930 in Floyd to the late Pelham and Ada Nolen Shelor.

She joined the Floyd Presbyterian Church at an early age. She grew up in Floyd, graduating in 1947 in the largest class until that time. She then attended Radford College and Florida Southern College at Lakeland, FL. After Collage she began her career as an Elementary School Teacher. She loved and inspired her students and was once nominated as the national teacher of the year. She was saddened when she retired, keeping in contact with many of her students throughout the years. . Betty wrote and had many poems published in local newsletters.

After marrying her late husband, John William Shelor, Sr., in 1950 and after giving birth to her only son John William Shelor, Jr., she quit teaching for a number of years to become a homemaker. The family traveled and lived in several different locations due to Johns transfers with N& W Railway. They spent 50 wonderful years together.

She was preceded by three brothers, Pelham Leonard “P.L.”, Dawson, and Robert Sr. “Bob” and one sister Irma Jean Pickeral. She is survived by her son John and three nieces and six nephews. She was especially proud of one nephew John Russell Potter’s accomplishment as a Chess Master and his ability to make a living doing what he loves.

She will be missed by her many friends and former students and by her lifelong friend Jean Rakes Robbins.

Funeral Services will be held 11:00 a.m. Monday March 21, 2011 at the Maberry Funeral Home chapel with Rev. David Taylor officiating. Interment to follow in Jacksonville Cemetery. Visitation will be held Sunday March 20, 2011 from 2 to 4 p.m. at the funeral home.