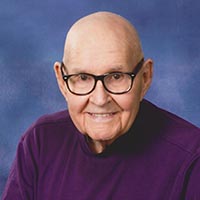 Harvey Daniel Shelburne, Sr., 93, passed away Saturday, June 23rd at his home in Radford. Harvey was born October 28, 1924 to the late Ferd and Ida Phillips Shelburne.

After graduating high school he attended Roanoke College and then National Business College. He worked as a successful salesman for Conagra Foods (Armour) serving the local area for 39 years. He was raised a master mason on July 17, 1953 in Virginia May Lodge #38 in Radford and was a member there until January 10, 1958 when he joined the Snowville Masonic Lodge #159. He received his 60 year Masonic veterans award in January 2013. He was also a member of the Radford Host Lions Club for 31 years and was an active member of Grove United Methodist Church for many years. Harvey was an avid Claytor Lake fisherman and also loved his yearly trips to Nags Head to surf fish. He also had lots of fun deep sea fishing with his Radford buddies, loved visiting Atlanta to watch the Falcons play, and one of his major passions in life was gardening.

The family would like to thank special caregivers Laura Hernandez, Ginger Patton, Kristina Williams, Brittany Caldwell and Donella Carter for their compassionate care, and the staff at Kindred Home Health Care.

He was preceded in death by his wife, Mary S. Shelburne; son, Dan Shelburne; and two sisters, Alma Dalton and Sally Ruth Lancaster.

Surviving are his two daughters, Carolyn Shelburne and her husband, Bill Clarke, and Charlotte Shelburne; sister-in-law, Edith DeMarco of Baltimore, Md.; four nephews and their wives, Mike and Karen Sawyers of Alexandria, Mike and Marie DeMarco of Glen Arm, Md., Bob and Linda DeMarco of Englewood, Fla., and Roger and Marsha Sawyers of Christiansburg; two nieces and their husbands, Robin and Kenneth Wright of Pound, and Sue and Henry Merrill of Milton, Fla.; and many other special friends and relatives.

The family will receive friends from 11 a.m. until 1 p.m. on Wednesday, June 27, 2018 at Grove United Methodist Church in Radford. Funeral services will begin at 1 p.m. with Rev. Mark Kilbourne officiating. Interment will follow in Highland Memory Gardens in Dublin.

In lieu of flowers, donations can be made to the Mary S. Shelburne Nursing Scholarship Fund, Radford High School Foundation, PO Box 2823, Radford, VA 24143-2823, or to Grove United Methodist Church, or the Radford Host Lions Club.

The Shelburne family is in the care of Mullins Funeral Home & Crematory in Radford. www.mullinsfuneralhome.com