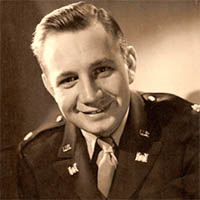 Dan graduated from Washington Lee High School then attended VPI (Virginia Tech). He was a member of Corps of Cadets, a Letterman, Civil Engineering class of 1940. Dan served in WWII as a Lt. Colonel in 31st Engineering Combat Battalion, 7th Army.

In lieu of flowers consider a donation to Carilion Hospice Sunshine Fund @ Carilion Foundation PA box 12187 Roanoke, Va. 24073 or charity of your choice.