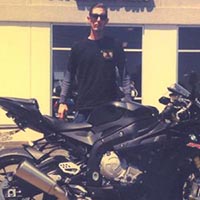 He was a Gold medalist in The Virginia Commonwealth games. Doug was a master glass installer and owned and operated Shank’s Glass Service specializing in Automotive glass. In his free time, he practiced martial arts and was an avid hunter. He was a wonderful son, father, and husband. Most importantly in all of Doug’s accomplishments and awards, he became a faithful Christian.

In keeping with his wishes, no services have been planned at this time.

Online condolences may be sent to the family at www.johnmoakey.com.