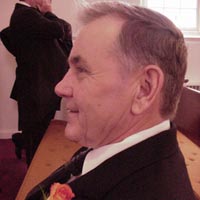 Vernon Odell Shanholtz, 79, of Christiansburg, Va., went to be with his Heavenly Father on Wednesday, December 17, 2014. Vernon was born in 1935 to Hobart and Leona Francis (McCauley) Shanholtz in West Virginia. He was the oldest of six children. Several years after the death of his mother, at age 11, he went to live with foster parents, Jack and Ruth (Ryan) Rudolph in Wardensville, W.Va.

Upon high school graduation, Vernon went to West Virginia University to obtain his Bachelors and Master’s degrees in Agricultural Engineering. He then served in the United States Army. Later he earned his PhD from Virginia Polytechnic Institute and State University in Civil Engineering. Thus many friends and family fondly call him “Doc.”

He married Mary Ellen McGuire at Easter in 1965, in Radford, Va., and they have two daughters. They have celebrated 49 years together. They frequently spent time outdoors sharing their love of gardening.

Vernon began his career in the late 50s as a Project Engineer for a watershed study for the United States Department of Agriculture. He then accepted a faculty position as research professor for Virginia Polytechnic Institute and State University for the Biological Systems Engineering Department. He developed application research programs for water resources and Geographic Information Systems (GIS) that have been recognized and used throughout the world.

He was a patient and generous person – investing countless hours mentoring emerging Engineers in the field from around the world. He retired after 33 years at the University. He then went on to found the well-respected environmental services firm, MapTech, Inc.

Vernon loved being outdoors – enjoying hunting, fishing, and working with family and friends. He and his wife, Mary, shared a passion for gardening. He also enjoyed spending time with his six grandsons.

Vernon Shanholtz will be remembered for a life of integrity, love, generosity and humbleness. He was a loving husband, father, brother and friend. His immediate family and friends feel privileged to have been a part of his life.

We are especially grateful to God for providing special time with Vernon the last month of his life under miraculous circumstances. A special thanks to Dr. Scott Jamison, Dr. Jesse Davidson, Dr. Robert Keeley and their nurses and staff for their care and kindness during these last few months. The family also thanks our family at the Fairlawn Grace Brethren Church, many friends and neighbors for their love and support.

Funeral Services will be held at 1 p.m. on Monday, December 22, 2014, at the Mullins Funeral Home in Radford with the Rev. Lester Kennedy officiating. Interment will follow in the Sunrise Burial Park in Radford where members of VFW Post #776 will conduct Military Graveside Rites. The family will receive friends prior to the service beginning at 11 a.m.

Flowers will be appreciated or contributions may be made to the Samaritan’s Purse, www.samaritanspurse.org/donate.

The Shanholtz family is in the care of Mullins Funeral Home & Crematory in Radford, Va., 540-639-2456. www.mullinsfuneralhome.com