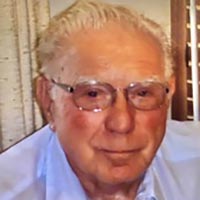 After his military service, Kenneth tried business school, worked at Viscose in Roanoke until it closed, then he worked at the Purina Feed Store, and drove a cab on the side. He married Louise in 1953 and moved his family to Floyd in 1957 where he owned and operated the Farmers Exchange Mill until he joined the U.S. Postal Service in 1965. He worked as a mail carrier until he retired in 1990. Kenneth was a dedicated mail carrier and was determined to get the mail to his patrons no matter what the weather conditions were.

After retirement, Kenneth enjoyed working on his farm. He raised Angus beef cattle and kept the cleanest hay fields in Floyd County. Thistles, chicory, nettles, and multiflora roses were his enemies. Kenneth worked hard and instilled a good work ethic in his children. Kenneth was also very jovial and full of life. He enjoyed talking to people and never met a stranger.

The family of Kenneth Marden Sewell would like to thank the staff of Commonwealth Senior Living in Radford and the staff of Medi Home Health Hospice for the wonderful care they provided.

A private graveside service will be held at the family cemetery.