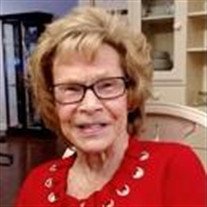 On April 21, 1950, she married Charles E. Scott. She assisted Charles as they made a home in Cumberland County, later in Charlottesville and Farmville, and finally in Christiansburg, VA. Cumberland was always her home.

She worked in manufacturing and retail. Letty was a courageous woman who was willing to take a risk. She learned to drive early to help the farm when other women were reluctant to get their licenses. She was a creative and artistic woman with many outlets. Her favorite pastime was visiting beaches and the local state park lake. She never knew a stranger and would engage in conversation with anyone and everyone. Letty believed that God put her on this earth to make people laugh and to have fun.
She was preceded in death by William T. and Estelle Norman, 7 of her siblings, and her beloved husband, Charles Scott.

Letty is survived by her daughter, Sharon G. Scott and husband John Tutle, brothers Ernest and Guy Norman, and numerous nieces, nephews, and cousins. Special thanks to her physician, Greg Beato, the English Meadows Team at Blacksburg, and the team of healthcare providers at Lewis Gale Hospital – Montgomery for their care over the last four years.