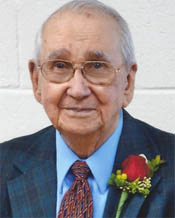 He was preceded in death by his parents, three brothers, three sisters, a nephew, a niece and one great nephew.

Scotty played minor league baseball with the Radford Rockets until he was drafted into the US Army. He served as an engineer in the army for two years, serving under Patton in the European Theater during WWII where he received two bronze stars. He attended the National Radio Institute and was founder and owner of Scotty’s Radio TV.

He was an entrepreneur businessman for many years. He was a charter member, youth sponsor, elder, deacon and Sunday School Teacher at the Community Christian Church in McCoy and at the age of 50 he started playing on the church softball team. Scotty loved to garden, fish and hunt throughout his life. During retirement, he loved to bowl and golf which included numerous trips with his golfing buddies. He also volunteered at Montgomery Regional Hospital for 28 years.

Funeral services will be conducted Sunday, March 16, 2014 at 2:00 pm in the Community Christian Church, McCoy with graveside service following at the family cemetery. In lieu of flowers memorial contributions may be made to the Blue Ridge Christian Camp, PO Box 428, McCoy, VA 24111 (www.blueridgechristian.org). Arrangements by McCoy Funeral Home, Blacksburg.