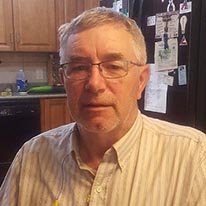 Vincent Day Scott, Jr., 68, of Pearisburg, VA went to be with the Lord on Saturday, November 13, 2021. at Heritage House in Blacksburg. Vince was born on December 23, 1952, in Charleston, WV and was a son of the late Vincent Day Scott, Sr. and Eveline Wriston Scott. Besides his parents, he was preceded in death by his daughter, Jennifer Rebecca Scott.

Vince received his B.S. Degree in Chemistry from the West Virginia Institute of Technology in Montgomery, WV. He started with the WV Dept. of Highways for seven years, and then moved to Pearisburg going to work for A.E.P. at the Plant in Glen Lyn, VA. He was a charter member, deacon, and on various committees at the Angels Rest Fellowship Baptist Church in Pearisburg. Vince loved his community, working for various civic organizations and never said no when he was asked to help. He loved helping the youth working in and out of schools and was an active member of “The Cure Chasers” for the Relay For Life.

A Celebration of Life will be held, Tuesday, November 16, 2021, at 1 pm at the Angels Rest Baptist Fellowship Church in Pearisburg with Pastor Craig Whittaker and Dr. Don McKinney officiating with burial following in the Birchlawn Burial Park in Pearisburg. The family will receive friends Monday evening at the Church from 6 – 8 pm.

Memorial donations may be made to Angels Rest Baptist Church in Pearisburg, Good Samaritan Hospice, the Heritage House in Blacksburg or to The Lewy Body Dementia Association.

The family would like to thank all the healthcare professionals and caregivers who help with Vince during his long battle with this disease.