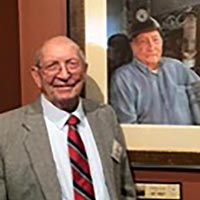 The family would like to thank the many friends and family that have supported Dudley over the last several years, especially Carol & Bobby Roop and Bernard & Debbie Duncan.

Dudley worked in the coal mines and at the Radford Arsenal. He loved to fish and trap and work in his garden. Dudley was a founding member of Community Christian Church in McCoy, where he served as a deacon and was a veteran of the U.S. Marines. He loved being with his family, sitting on the front porch watching the birds, and playing the Dobro guitar. Dudley had a passion for collecting and presenting coal mining relics and stories. Dudley was the featured coal miner in the book, Keepers of the Tradition by Michael Abraham and Leslie Roberts Gregg. He was the Grand Marshal of the 2018 Blacksburg 4th of July parade.

Dudley wanted to keep the coal mining tradition alive and it would make him happy for people to continue to come out and support the annual Coal Miner’s Day in McCoy, (this year May 16) and for that reason, in lieu of flowers, donations can be made to the
Coal Mining Heritage Association of Montgomery County, Virginia
P.O. Box 511
McCoy, Va. 24111