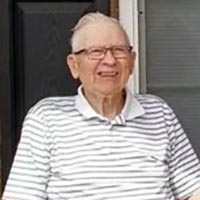 Charles Edward Scott, 88, of Christiansburg and Cumberland, Virginia, passed peacefully on Saturday morning, July 25, 2020, with his daughter holding his hand.

He was born in Townsend, Tennessee, to Leonard and Myrtle Scott, who preceded him in death. The family moved to Cumberland, Virginia after World War II. Charles graduated from Cumberland High School and later joined the U.S. Navy. He married Letty Estella Norman during his service time in the Navy.

He worked in farm supply sales and management with the Southern States from 1960 until 1970 when Farmers Cooperative hired him. He successfully turned around this organization with the help of his favorite work team. He and his wife remained in Farmville until his retirement in 1996. At that time, they moved to Cumberland Courthouse.

He was a member of Fitzgerald Baptist Church in Cumberland, Virginia.

Charles will be remembered for his love of family, friends, and community, work ethic, and sense of humor.

He is survived by his wife of 70 years, Letty N. Scott and daughter Sharon Scott (John Tutle).

Graveside services will be held on Monday, August 3, at 10:00 am at Center Presbyterian Church in Cumberland Court House with Pastor Barry Vassar officiating. The family asks that those attending the service be mindful of social distancing and masking when asked.

Instead of flowers, the family requests that contributions be made to Fitzgerald Baptist Church.

Online condolences can be made by visiting www.mccoyfuneralhome.com