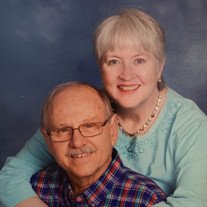 Janet Alverta Thompson Peters Schleicher, 70, passed away peacefully at home with family by her side on Friday, February 5, 2021, after battling idiopathic pulmonary fibrosis for more than four years. She was the wife of Bruce Anderson Schleicher. They shared nearly 25 years of marriage.

Janet grew up as a devoted member of Centenary United Methodist Church in Lynchburg, VA, and later transferred her membership to St. Paul United Methodist Church in Christiansburg, VA. She enjoyed traveling, vacationing at Smith Mountain Lake and Nags Head, NC, spending time with her friends and family, going on her Friday evening movie dates with her husband, gardening, sewing, drawing, painting, baking (sour dough bread), collecting beautiful artwork, attending concerts (in arenas or in her car) and card games. Janet will be remembered for her warm and loving spirit, her ability to make friends and family with anyone, anywhere, her sense of humor, her smile and her consummate tardiness. In her spare time, she enjoyed helping people create wedding invitations and graduation announcements. She was a loving wife, mom to everyone, grandmother, sister, aunt, teacher, mentor and best friend. Her passing leaves a hole in the lives of everyone who was privileged to be a part of hers.

The family extends gratitude for her caretakers, Kathy Ayers, Laura Collins, Dr. Brian Southern, husband Bruce, the hospice nurses and aids, and many others.

The family plans to hold a Celebration of Life service at a later date.

In lieu of flowers, please consider a contribution in memory of Janet to Cleveland Clinic. Gifts can be sent to:
Cleveland Clinic Foundation c/o Philanthropy Institute P.O. Box 931517
Cleveland, OH 44193-1655
Or online at my.clevelandclinic.org/giving (Respiratory Institute)