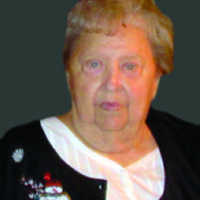 She graduated from Pulaski High School and attended Roanoke Business College. After graduation Darleen worked as a secretary for the Navy Dept. Bureau of Aeronautics in Washington D.C.

Darleen met Charles “Chuck” Sawyer in the spring of 1956 while he was on break from William & Mary College. After a year of dating they married on June 29, 1957 and took up residence in Norfolk, VA where Chuck worked for the FBI. Later Chuck became an FBI agent and Darleen followed him through the years to reside in many locations including Washington D.C., Indianapolis IN, Gary IN, Kansas City MO, Los Angeles CA and West Covina CA.

Darleen was active in PTA serving in many positions including president. She was given PTA’s Honorary Service Award. She volunteered with both boy scouts and girl scouts. She was a 49 year member of the West Covina Emblem Club where she was a past president. Darleen attended First Presbyterian Church of Covina where she was an active member for 47 years.

In lieu of flowers donations in her memory can be made to First Presbyterian Church, 310 N. 2nd Street, Covina, CA 91723.