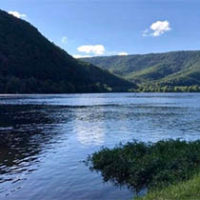 William Richard Saunders, of Blacksburg, formerly of Fairfax, VA died peacefully in his home on February 28, 2016. He was 60 years old.The son of Grace (Beth) Richards and Robert Saunders, Will was raised in Fairfax, VA alongside his five sisters and brothers: Jacqueline Barton, Robert Saunders, Elizabeth Cook, Donald Saunders, and Barbara Saunders.

After graduating from Fairfax High School, he moved to Boca Raton, FL. There, he fell in love with the sound of the waves, inspiring him to study oceanography, and later, acoustic engineering at Florida Atlantic University.

In 1982, he returned to Fairfax and married Connie Fitzsimmons (later divorced), with whom he had three children: Emily Saunders, Laura Saunders, and Benjamin Saunders.

The family moved to Blacksburg in 1989 where Will completed a Ph.D. at Virginia Tech. With his colleagues at the university, he later co-founded Adaptive Technologies, Inc. a company that pioneered the intersection of research and industry in the New River Valley.

In Blacksburg, William was a loving father and teacher to many. He taught his children how to ride their bikes without training wheels, developed and curricula for courses in controls and acoustics, and later established a scholarship fund to support education and creativity among Virginia Tech engineering students. Will found his own source of creativity climbing the mountains of southwest Virginia, playing basketball and writing music.

Also surviving him are his beloved friend, Lynne Reece; her daughter, Stephanie Meeker of Cedar Rapids, IA, and the dopest pup who knows what’s up, Bodhi.

Through his last moments, William was committed to causes of social justice; he believed that compassion for all would lead to a better world.

An open memorial service will be held at St. Mary’s Catholic Church this Friday, March 4, 2016 at 11 a.m. In lieu of flowers, love each other.