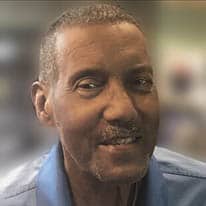 The Life of Roger Allen Saunders: “I have fought a good fight, I have finished my course, I have kept the faith.”

A devoted husband, father, grandfather, Brother-In-Law, Uncle, Cousin, and Friend. Roger was born on January 11, 1955 in Portsmouth, OH to the late Ernestine Saunders but was raised by his grandparents, the late Thomas and Bettie Saunders.

Roger graduated from Oakvale High School in 1972 and attended Bluefield State College thereafter. He was united in Holy Matrimony with Precilla Parks on April 18, 1981 and had three sons. He worked tirelessly for thirty years at N&S Railroad from 1985 until he retired in 2015. While working as a dispatcher, he gained the nickname “New River”.

At an early age, Roger had a love for sports. He played high school basketball and was given the nickname “Wilt” after Wilt Chamberlain because of his height and scoring ability. He also enjoyed bowling, fishing, fantasy football, and playing golf.

He had a love for God and the church. He was a faithful member of Goodwill Church of God in Christ where he served in the choir and played both the guitar and the keyboard.

In lieu of flowers, the family requests memorial contributions be made to the Goodwill Church of God in Christ (251 Riverview Lane Eggleston, VA 24086). There will be a funeral service conducted to honor the life Roger gifted this earth on Saturday, April 9, 2022 at 1:00 PM with Elder Calvin Lee officiating in the Kendall Funeral Home Chapel. The family will receive friends in the Kendall Funeral Home Chapel on Saturday, April 9, 2022 from 12:00 PM until 1:00 PM. A guestbook is available by visiting www.kendallfuneralhome.com. The staff of Kendall Funeral Home are honored to serve the Saunders family.