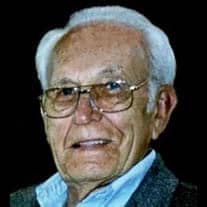 Walter was born March 10, 1918 in Newport, Giles County, Virginia, to George Henderson Sarver and Ether May Tabor Sarver on the family homestead, which was granted to ancestors from the Revolutionary War period and remains in the family. He attended a one room schoolhouse until Newport School was built where Walter played on the 1934 basketball team winning the District Championship.

Upon returning from war, he and Jean settled in Roanoke, Virginia to raise their family. He worked at an auto shop until he opened Sarver & Sons Grocery in 1952, which he ran for 15 years. It was the kind of grocery store you wish still existed. He retired from Oren-Gruman’s, Vinton Fire Truck Plant, in 1982 as the Head Supervisor for the Final Assembly Line.

Walter and his sons built his home on a 30 acre farm in Bedford, where he and Jean moved in 1981. He enjoyed the peace and quiet of the country. For years they raised chickens and goats and had a garden plot larger than an acre cultivating apples, pears, grapes and all varieties of vegetables. This home was where his children, grandchildren and daughters-in-law learned to make biscuits and gravy. Where all the grandkids helped with picking then canning the green beans and beets, always the two most popular cultivars of the harvest. Fresh tomatoes were still grown on the back deck this year. He was a long time member and Deacon of Belmont Christian Church, raising his family in God’s path. Walter loved dogs and horses. He loved to read, listen to Dolly Parton, watch local and national news, sports, documentaries, and musicals.

Walter was a man of few words but one for whom each one mattered, and each was delivered with a comic’s wit and a sage’s wisdom. Sunday brunch at the farm was always open to whomever could come and be enlightened by Walter’s stories. He was an inspiration and a father figure to far more than his 8 children. His knowledge, understanding and kindness was not anything you could miss. A problem solver, he could fix anything mechanical. A hero who fought for democracy and what is right in the world. He voted in every Presidential election since 1940 and epitomized “The Greatest Generation”.

He represented the best of us.

At 98, Walter became the oldest American to have triple bypass open heart surgery at Carilion Roanoke Memorial Hospital. He celebrated his 100th birthday at The Hotel Roanoke with 130+ guests and family members. October 2021, Walter, and three of his sons were honored at The National D-Day Memorial, with bricks to commemorate their service as veterans. This resulted in a front page Bedford Bulletin news article and three Roanoke TV stations interviewing him for the 6 o’clock news. He couldn’t stop grinning from ear to ear and stated “if I knew they were coming, I would have been better prepared”.

Walter left this world exactly how he wanted. His last meal was a Country Ham Biscuit. He was not in pain, and was surrounded by family and the incredible and compassionate nurses and doctors in the Palliative Care Unit. Carilion Internal Medicine, Cardiology and Wound Care Center provided exceptional care through the years. The family would also like to thank Salem VA Medical Center for providing care from Kindred Home Health and especially Brittany Baker and Rhonda Milan.

Family and Friends are invited on Saturday, January 15, 2022, at 2 p.m. to a Memorial Service held at Belmont Christian Church, Roanoke. Interment with Military Honors will follow at Mountain View Cemetery, Vinton and a Celebration of life at The Family Event Center, Moose Lodge, Vinton.

In lieu of flowers, memorial contributions may be made to the National D-Day Memorial, Bedford or the Quilts of Valor Foundation, Group 80780, Roanoke QOV Stitchers.

Online condolences may be shared with the family at www.oakeys.com Vinton Chapel.