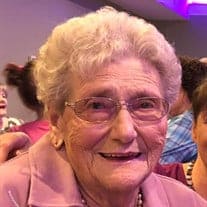 Virginia Evelyn Johnston Sarver, 90, of Pearisburg, went home to be with her Lord and Savior on March 6, 2022, at Roanoke Memorial Hospital. She was born in Goodwin’s Ferry, Virginia on June 4, 1931 to the late Charles and Verna (Kessinger) Johnston.

She was preceded in death by her husband of 55 years, Alvin Edwin Sarver. Also preceding her in death was her son, Ritchie Dean Sarver of Ohio; her brother, Charles Johnston of Orlando, Florida; a sister, Nancy Epperly, of Christiansburg; and sister, Alice Simmons of Christiansburg; a brother, Thomas, who died as an infant.

Flowers will be appreciated, or In lieu of flowers, contributions may be made to the Memorial Fund at the Pearisburg First United Methodist Church, 401 Hale Street, P.O. Box 400; Pearisburg, VA. 24134.

The funeral service will also be live streamed on Sharon Sarver’s facebook page, for those who are not able to attend. Due to the COVID-19 pandemic, masking and social distancing are requested. Arrangements by McCoy Funeral Home, Blacksburg.