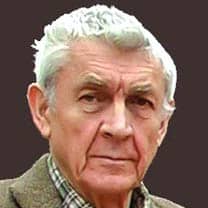 He is survived by his three sons, James, Christian and wife Jane, and Chad; four grandchildren, Hadden, Evan, Eric, and Nathaniel; his first wife, Christine Martinez San José of Honesdale, Pa.; his companion of many years, Barbara Holcomb, and her son, Justin Holcomb, Blacksburg, Va.

Julio earned his architectural qualifications and subsequent doctorate at the University of Madrid, with a year in between at the University of Oregon in the U.S. He completed his military service, won a painting prize, and in 1957 married Christine Griffin, originally from England. In 1958, Julio moved to London, where he practiced architecture, winning a medal from the Royal Institute of British Architects. He also earned his qualification as a City Planner.

In 1963, Julio returned to the University of Oregon with his family, to teach in the School of Architecture and Allied Arts. In 1966 he joined the architecture faculty at Syracuse University, N.Y., eventually becoming Acting Dean. While there, he earned a City Planning award. He was also prolific in his favorite artistic medium, fine pencil drawing. In 1979 Julio was appointed Dean of Architecture at Virginia Polytechnic Institute and then in 1982 Dean at the New York Institute of Technology. He was fondly remembered by his many students. In 1994, Julio retired, eventually to Blacksburg, Va., and focused on his art, which challenged the cruel abuses endemic to a world driven by a hunger for money and power. He also enjoyed long walks, a healthy diet and working in the garden.

In lieu of flowers, please consider a donation to the Arbor Foundation, the Sierra Club Foundation, or the United Farm Workers of America in memory of Julio Martinez San José.