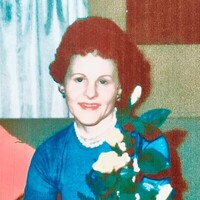 She was the youngest of eight children. She grew up in Cabin Creek, W.Va. where she met her husband and the love of her life, Harry, when she was just a teenager. They married on June 19, 1948 when she was seventeen. They had a son, Harry Lee, Jr. who died at birth and later a daughter, Wanda.

Bernice was a full-time homemaker until her daughter started school, at which time she decided to further her education and get her teaching credentials. She taught elementary school in Clay County, W.Va. and until today kept pictures of her students and a special memory of each one. She loved her teaching career, but gave it up to help raise her grandsons. Later, she worked as a department manager in a small department store.

Her greatest mission on earth was to love and nurture her family and keep the nicest home possible for them. She excelled at cooking and cleaning and according to Harry, her family owned the patent on cleanliness. There was never a visit that didn’t include food.

She is survived by her loving and devoted family, daughter and son-in-law, Wanda and Johnny Gibson of Claytor Lake, Va.; grandsons and granddaughter-in law, Garland (Cheryl) Vaughan of Blacksburg, Va., and Glenn Vaughan of Fairlawn, Va.; and a host of nieces and nephews.

Bernice was fiercely independent, and private by nature, but she always had good words for her neighbors and described them as the friendliest group she had ever known. She tried to learn the first names of all the people that she saw regularly and never failed to greet them.

We have lost our wonderful mother and we will miss her terribly but she has given us the strength to continue. She has been the glue that has held us together by her own sacrifices. Heaven has gained the greatest housekeeper of them all, and we have no doubt that she is eager to assist in maintaining the house of the Lord to keep it orderly and in harmony and to reunite with her husband.

The family would like to thank Intrepid Hospice for their excellent care in a most difficult time.

In keeping with her wishes, there will be a private graveside service in Oak Hill, W.Va.

The Sampson family is in the care of Mullins Funeral Home & Crematory in Radford, Virginia. www.mullinsfuneralhome.com