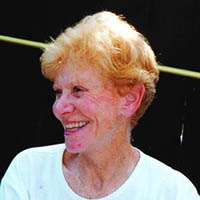 Phylis Salom passed away at her home in Blacksburg, Va. at the age of 88 on Thursday, November 12, 2020. She is survived by her sister, Arline; sons, Scott and Don Salom; daughters-in-law, Mar and Lety; grandchildren, Ben, Sam, Avi, Harris, and Daniel; and great-grandchildren, Eleanor and Nolan.

Born in 1932, Phylis was the daughter of Charles and Betty Falick (née Goldhagen). She grew up in the Bronx (Pelham Parkway), N.Y. A 1952 graduate of CCNY, she went on to work as an assistant buyer at Bloomingdales. Then after having children she became a public school teacher. With continued education, she became Human Resources Director for Dept stores, banks and law firms. Once her sons moved away, Phylis moved from Merrick, Long Island to Manhattan, a place she loved dearly. She was a huge fan of the arts, including ballet, symphonies, theater, art museums, etc. She always had the bug to travel and went to virtually every continent on earth, often with her friends.

While in Manhattan, she found a soul mate in Jerry Nebin, a civil engineer, who passed away in 1999, after 12 years of companionship. Later in life, Phylis began a long-time passion for bird watching, which gave her great joy, especially when Conan O’Brian joined their birding group one day in Central Park to film a piece for his late-night show.

When she reached 81 years old, she moved to Blacksburg, Virginia to be closer to Scott and his family. She continued her interests but began slowing down. Reading all things interesting was one of her great joys. She had a 50 year subscription to the New Yorker magazine. Even though she was on a limited income, Phylis loved her family and was determined to provide for them during their formative years as well as later in life. She also freely supported the Sierra Club, Doctors Without Borders, NPR, the Lyric Theater, and much more.

She will be very much missed by her family and friends. No formal services will be held.