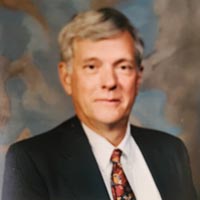 John Edward Sadler Jr., of Pulaski, Va., passed on Thursday, December 17, 2020 due to complications related to Parkinson’s Disease. John was born in Evanston, Ill. on July 5, 1935 and was the son of the late John Edward Sadler and Lila Saul Gilmer Sadler.

He spent his early life in Richmond, Va. before moving with his family to Pulaski, Va. John was a 1952 graduate of Pulaski High School and a 1956 graduate of Hampden-Sydney College where he was a member of The Kappa Alpha Order.

His early professional life began at Miller Container Corporation in Roanoke, Va. After marrying Betty Neas Sadler in 1961, they relocated to Pulaski where he joined his family’s business, Sadler Hosiery Mill. While at Sadler Hosiery, he held the positions of Office Manager and Sales Manager, and later became President. John later held the position of Vice President and Sales Manager at Chesapeake Container Corporation in Roanoke where he retired in 1991.

John was involved in various civic and community organizations including Pulaski Rotary Club, the United Way and was a member of both Pulaski/Thorn Spring and Roanoke Country Clubs. He was an Elder at 1st Presbyterian Church for a number of years. He served as the 1st President of Friends of Pulaski Theatre a role of which he was very proud.

He thoroughly enjoyed his retirement of almost 30 years. John was an avid collector of Donald Duck Comics. He also enjoyed a good game of badminton and participated in the Commonwealth Games medaling in their Senior Division. John’s biggest adventure was hiking into and out of the Grand Canyon with his brother in law and nephews. He loved travel and he and Betty drove twice across the United States, visited Canada, took the Queen Elizabeth II to England for a month, and sailed on several cruises. Although John loved to travel, his favorite retreat was at the family cabin in Giles County on Big Walker Creek.

Crossword puzzles, books, the morning newspaper and a good hot latte was part of his day. John relished a good debate about multiple topics. He felt certain that everyone deserved the benefit of his opinion.

A special note of gratitude goes out to the staff of Pulaski Health & Rehabilitation Center and Dr. Richard Williams.

In lieu of flowers, the family requests donations be made to 1st Presbyterian Church of Pulaski, Box 824, Pulaski, Va. or a charity of your choosing.