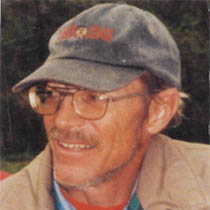 Robert Alan Russell, 64, of Blacksburg, passed away Wednesday, July 20, 2016. Born in Fredericksburg, Va., he was a son of the late Jesse and Marian Russell.

Rob was employed at Virginia Tech for 31 years, with most of that time spent managing and supervising the freshman chemistry laboratories.

Rob was a member of the Boy Scouts of America for most of his life. In recent years he was dedicated to his work with the Scouts of Troop 44 and Pack 44, in addition to working with Eagle Scout candidates in the New River District. He earned many awards, including the Silver Beaver.

He is survived by his wife, Meriel, and two sons, Alan Russell and Darrell Russell, all of Blacksburg; his sister, Cynthia Russell and sister-in-law Judith Lovat, of Philadelphia, Pa.; sister-in-law Diane Owens of Christiansburg, and several nieces and nephews.

In lieu of flowers, gifts can be made “In Memory of Rob Russell” to the Blue Ridge Mountains Council, Boy Scouts of America, 2131 Valley View Blvd N.W., Roanoke, VA 24012.