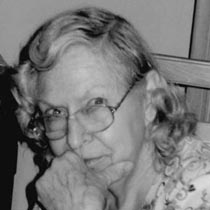 She was raised in Allentown, Pa., where she met Mr. Roth. Both, along with their respective families, were members of Grace Evangelical United Brethren Church at Sixth and Washington Streets. She attended Kutztown State University and later earned a B.A. in art education at Montclair State University.

Mrs. Roth was a homemaker and a teacher of piano. Music filled her life. As a pianist, she could play almost anything by ear and seemed to know every song. She could always be found on a Sunday singing soprano in the choir, and could be depended upon as a volunteer to provide musical accompaniment at all sorts of functions, particularly at homes for the elderly. She and Dr. Roth were patrons of the arts, and enjoyed especially going to the opera in New York City. She had a special affinity for cats.

Mrs. Roth is survived by her devoted husband, David and by their son, Richard A. Roth, both of Blacksburg, Va.; and by her sister, Mrs. Emma Jane Bray Mosser, of Whitehall, Pa. Also left to cherish her memory are her grandchildren, David E. Roth, Douglas A. Roth, and Liza L. Roth; as well as three great-granddaughters and two great-grandsons.

If you wish to make a contribution in her memory, the family asks that you donate to Oxfam or to your local animal shelter or humane society.