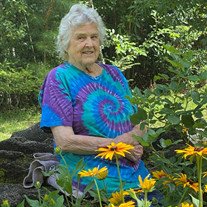 Elizabeth H. “Liz” Rogers, 86, of Blacksburg, VA, beloved mother, textile artist, shepherdess, and math teacher, died on May 5, 2021, leaving this world on her terms and exactly as she lived it: enjoying good food, a glass of wine and surrounded by family.

She was born June 18, 1934, in Pasadena, CA to George J. and Anna (Turnbull) Hall. A gifted student, she received a scholarship and endured four years at Bryn Mawr College, leaving there with a bachelor’s degree and a wedding engagement, which the president of the university denounced saying “only our failures marry.”

Ever the rebel, she wed a Princeton graduate & US Marine, Trenton NJ native Robert Frank Rogers on August 18, 1956 at the First United Presbyterian Church in Pasadena, CA. Her husband, who became a zoning attorney in Burlington, NJ, died in August 2003. Liz worked at a bank, then taught middle school math at Northern Burlington Jr.-Sr. High School. She birthed four children: Bob, Tony, Anna, and Amy, all of whom survive and are married to Shirley, Renee, Mark Shuster, and Brian Rensberger respectively. She was blessed with nine astounding grandchildren and supported their talents and exploits, all survive. In addition to her spouse of 47 years, she was preceded in death by her parents and older brother George (Flo) Hall. Her sister Melinda survives.

She will be remembered as a 4-H leader teaching sewing and entomology as well as running a sheep farm in Columbus, NJ, where visitors often encountered lambs running around the kitchen and something delicious in the oven. Her artistry in textiles included spinning, sewing, crocheting, and knitting. But her true talent was in quilting, which combined her love of math with principles of art and deft use of color. She attended Hedding United Methodist Church for many years. Upon moving to Blacksburg, VA, she attended Blacksburg United Methodist Church, visited Reevesville Baptist Church and most recently supported Newport-Mt. Olivet United Methodist Church. She was also a strong supporter of the Special Olympics, cheering on her grandson George. She was an avid gardener, voracious reader, Hokies fan and loved sports of all kinds. She was outspoken and stubborn but had a great sense of humor. She made dear friends in New Jersey, Idaho, South Carolina, Virginia and beyond.

In lieu of flowers, memorials may be sent to the funeral home but made payable to Special Olympics of VA Area 9, or Reevesville Baptist Church for meals ministry, or Newport-Mt. Olivet United Methodist Church.

The memorial service will be recorded and a link provided to those who request it.