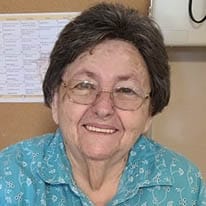 Mildred Jane Havens Robertson, 87 of Pearisburg, VA went to be with the Lord on January 9, 2022, at Lewis-Gale Medical Center in Salem, VA. Mildred was born on October 21, 1934, in Pearisburg, VA and was a daughter of the late James Walker Havens and Myrtle Robertson Havens.

Besides her parents, she was preceded in death by her husband, James “Jimmy” Anderson Robertson, eight brothers, William, Ed, Pete, Walter, Joe, Gene, Robert, and Marvin Havens and one sister, Geneva H. King.

Funeral services will be conducted Wednesday, January 12, 2022, at 1pm with Pastor Gary Poff officiating with burial following in the Birchlawn Burial Park in Pearisburg. The family will receive friends at the Givens Funeral Home in Pearisburg Wednesday before the funeral from 11am – 1pm.

The family would like to thank Highland Ridge Rehab for their care for Mildred, the past two years and Kindred Hospice Agency for their care this past week.