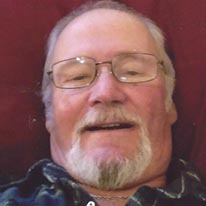 Butch grew up in Narrows, where he was raised by his grandmother, Ethel Fletcher Nickerson and was a 1971 graduate of Narrows High School. He was employed for many years for the Norfolk & Southern Railroad.

Per Butch’s wishes, he will be cremated, and there will be no services. The family is being served by Givens-Riffe Funeral Service in Narrows, VA, (540)726-2442, and online at riffefuneralservice.com.