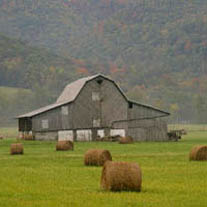 Helen Hutchison Robertson, of Christiansburg, Va., passed away from natural causes on May 10, 2008 at the age of 91.

Born April 28, 1917, she spent the majority of her life living in Craig County and working on the family dairy farm before moving to Christiansburg several years ago. She was preceded in death by her husband, James Edward Robertson, parents, Bernie and Elizabeth Hutchison, sister, Ethelyn Duncan, and brother, Gip Hutchison.