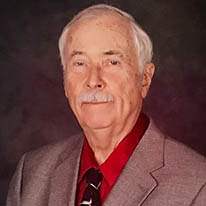 Daniel Howe “Danny” Robertson, 76, of Pearisburg, VA, passed away on Tuesday, August 3, 2021, at his home after a long illness. Danny was born July 28, 1945, in Thessalia, Virginia, son of the late Harold Woodrow and Lura St. Clair Robertson. In addition to his parents, Danny was preceded in death by his brother Douglas Robertson.

Danny grew up in Thessalia with his two cousins, Kirby and Roger Robertson. He enjoyed hunting, fishing, gardening, and spending time with his family. He went on to work at the Pearisburg Post Office for over 30 years where he enjoyed being able to meet so many people and make life-long friends. He particularly liked to meet the new hikers arriving on the Appalachian Trail each spring and was known to occasionally loan them his truck to run errands after meeting them just minutes before. Danny also served his community as a member of the Town Council, Mayor of Pearisburg, and on many other boards and committees over the years. He enjoyed seeing his small town be successful.

He is survived by his loving wife and health and wellness warrior, Lawanda Moye Robertson. They were married for 54 years, after being high school sweethearts. Lawanda seldom ventured far without Danny and was his wellness warrior after multiple heath procedures and a long-term battle with his heart and liver. They spent several summers traveling across the western states and exploring the many national parks. They also enjoyed gardening and beach trips together.

In addition to his wife, Danny is survived by his son, Todd Robertson and wife, Dana, daughter, Lora Anderson and husband, Jeremy, and grandchildren Loren and Jadan Robertson and Isabella and Bryson Anderson.

The family will receive friends on Wednesday, August 4, 2021, from 6-8pm at Givens Funeral Home in Pearisburg. The funeral service will be held at Thessalia United Methodist Church on Thursday, August 5, 2021, at 1:00pm with Charles Henderson and Rev Dr Fred L. Austin officiating with burial following in the Thessalia Cemetery.

Memorial contributions may be made to the American Chestnut Foundation www.support.acf.org/donate/tributes in lieu of flowers. Online condolences can be sent to the family at givensfuneralhome.com.