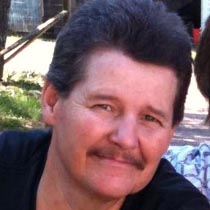 Timothy Harold Roberts, age 54, of Christiansburg, went to be with our Heavenly Father August 23, 2016. He was born in Christiansburg, Va. May 30, 1962 to the late James Noblin, and Nellie Pauline Wells Roberts.

He was loved and adored by his family, and friends. Unconditional love as a father, husband, pawpaw, brother, and uncle. Timothy was well known, as one of the top upholstery reconstructive services in the New River Valley. Timothy will be missed greatly, but knowing we will see him again, is the faith we will live by.

Funeral services will be conducted Saturday, August 27, 2016 at 11:00 am in the McCoy Funeral Home Chapel with the Rev. Ed Gallimore officiating. Interment will follow in the Roselawn Memorial Gardens. The family will receive friends from 10:00-11:00 am prior to the service at the McCoy Funeral Home, 150 Country Club Dr., SW, Blacksburg, VA.