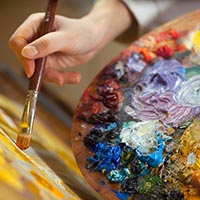 Florence Kingsbury Roberts, 104, of the Warm Hearth Village, Blacksburg, Va., passed away on Wednesday, July 8, 2009. Born on November 9, 1904, in Herington, Kan., she attended boarding school in Tarrytown, N.Y., and then went to the University of Kansas.

She met Clarence R. (Keeze) Roberts while at Castleon-Hudson and they were married in Chicago on December 28, 1923. They first lived in Morrisville, N.Y., then in Norwich, N.Y., where “Keeze” was a country veterinarian. In 1930 they moved to Leonia, N.J., where they lived for 66 years. They raised three children and were active in the community.

Florence was an artist specializing in stencils, painting on glass, and country tin. She was also a talented seamstress, poet, and musician.

She was predeceased by her husband of 75 years; her parents, Victor C. and Hermina T. Kingsbury; and her two sisters, Lurene K. Stone and Mildred K. Brown. She is survived by her three children, Doris R. Foulds, of Fullerton, Calif, Bruce Roberts and his wife, Virginia, of Delaware, Ohio, and Kent Roberts and his wife, Shirley, of Williamsburg, Va.; nine grandchildren; nine great-grandchildren; one greatgreat-grandchild; and several nieces and nephews.

A special thank you to Stella Collins who was our mother’s devoted caregiver for over five years. The Roberts family is so grateful to Stella.

A memorial service will be held 3 p.m. on Thursday, July 9, 2009, in the McCoy Funeral Home with the Rev. William L. Love officiating. Graveside services will be held in Holland Patent, N.Y., at a later date.