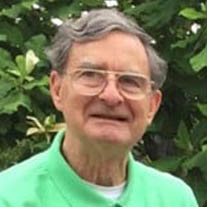 Marvin, known to friends and colleagues as Pat, was born on April 3, 1944, in Nashville, Tenn., the son of Marvin Jordan Risen and Mary Emily (Rice) Risen. His father, a field agent for the F.B.I., died before he was born, and a few years later his mother married another agent, Francis Norwood, who raised Pat as his son.

Pat graduated from Montgomery Bell Academy in 1962, and studied mechanical engineering at Georgia Tech, where he lettered in gymnastics. After graduating in 1966, he served for two years in the U.S. Army, primarily at the Aberdeen Proving Grounds in Maryland and the Joliet Army Ammunition Plant in Illinois. After receiving an honorable discharge, he moved to Washington, D.C., where he studied at the American University, receiving his masters degree in business administration in May 1972.

Three months later he married Elizabeth (Chickering) Risen, and the two moved to Corning, N.Y., where Pat began his long career in international business, and where both of his sons were born. His background in engineering and business made him a valuable part of Corning, Inc.’s global sales team, and his work took him around the world, from Marseilles to Singapore. He and his family even spent 18 months living in Tokyo, an experience that left Pat with a love for all things Japanese.

In 1985 the Risens moved back to Pat’s hometown, where he worked for Alcoa Fujikura Ltd. After the fall of the Iron Curtain, he was among the first American businesspeople to enter Eastern Europe, making deals in Poland, Slovenia, Russia and Kazakhstan to upgrade communications systems with AFL’s fiber-optic cable. Pat tried to retire in 2002, and he and Elizabeth moved to Blacksburg, Va. But the allure of international business pulled him back, and he closed his career with several years at Synchrony, a local technology company.

Like any good engineer, Pat loved to tinker in his spare time, and made easy friends with mechanics and plumbers – really anyone who would lend an ear.

He is survived by his wife and sons, Clay (Joanna) and Michael (Meg); his nephew, Tim Newton; his grandchildren Catherine, Talia, Chickie and Elliot; his brother-in-law Bill Chickering and sister-in-law Sharon Chickering; and numerous cousins and friends. He is predeceased by his parents, his stepfather, and his brother, Daniel. He will be honored with a visitation from 11 to 1 pm on Sunday, August 22, at the McCoy Funeral Home, 150 Country Club Dr., SW, in Blacksburg.

In lieu of flowers, his family asks that donations be made to the Alzheimer’s Association, alz.org.