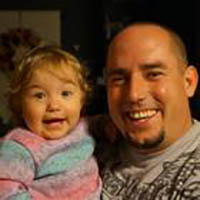 Barry Dustin Rippy, 32, of Pearisburg, went to his heavenly home Saturday, September 17, 2016 at his home in Pearisburg, VA. Barry passed due to complications from a recent serious illness.

A Carteret County native, Barry was an avid surfer, fisherman and hunter. Barry worked alongside his parents in their family business The Triple S Pier at Atlantic Beach, NC until 2005 when he then relocated to their farm in Pearisburg, VA where he resided at his passing.
Barry was preceded in death by a brother, Harry (Buddy) Rippy, Jr.

Left to cherish his memory are his parents, Harry & Patrice Hipps Rippy; his brothers, Brandon and Brian; and his daughter, Charlotte.

Funeral services will be held Thursday, September 22, 2016 at 3:00 P.M. at Oak Hill United Methodist Church, Candler, NC, with Rev. Lisa Hartzog officiating. Burial will follow in the church cemetery. The family will receive friends thirty minutes prior to the service.
Groce Funeral Home on Patton Ave, Asheville, NC, is assisting the family. Online register is available at www.grocefuneralhome.com.
There will be no planned local services in Virginia.