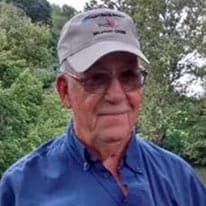 Arthur William Riggs (Bill), 85 of Pembroke departed this life to be with his Savior November 24, 2021 surrounded by the love of his family. Born in Giles County on August 28, 1936, he was a son of the late Raleigh and Lelia Whittaker Riggs.

Bill loved music, and was the lead guitar player for the VFW Post 600 in Narrows, VA for many years. Eighteen years ago, Bill took a job with Larry Jay Williams as a supervisor. He became known as “Pops” and “Old man” with workers at the Lime Plant in Pembroke, VA.

Bill enjoyed his grandkids and great-grandchildren. Bill also enjoyed gardening, watching the New York Yankees play ball on TV, probably while eating chocolate, for it was his favorite food. Bill met his wife by standing on a cliff throwing rocks at her, perhaps this is how he and Sue have been married for the past 65 years.

Left to cherish his memory to their hearts are his wife, Mary Sue Stump Riggs; a son, Dennis Riggs (Anita) of Pearisburg; daughters, Brenda Hall (David) of Salem, Becky and Jay Williams of Pembroke, Drema Davis of Pembroke, Connie Smith of Christiansburg, and Gregory Riggs of Pembroke; brothers, Gilbert Riggs of Princeton, WV; sisters, Mary Coy of Princeton, WV, Della Willein of Greensboro, NC, and Jenny Gibson, WV; son-in-law, Brian Stafford; many grandchildren and great-grandchildren; and a host of nieces and nephews.