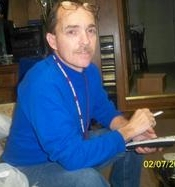 Roger Conrad Ridpath, Jr. battled numerous medical conditions which cut his life short and now rests in peace with his heavenly father. Roger, 45 of Pulaski, Virginia received his Angel Wings on Friday, February 21, 2014. When he got to the Pearly Gates there to meet him was his grandparents; Daniel & Bertie Ridpath and Marvin & Velda Quesenberry (his Papa Marvin was so excited to meet his grandson for the first time). Also waiting to see him was his lifelong best friends; Larry Ridpath and Sammy Lane. Roger was born October 22, 1968 in Pulaski, Virginia and lived in the area all of his life. He was the loving son of Linda Ridpath & Garry Ayers and Conrad & Wanda Ridpath. Roger leaves behind to forever miss his Loving, Caring Spirit & Sweet Grin. Sister and best friend- Kim Lawson & her husband, Troy. Brother-Caleb Ridpath, Sister- Terri Lynn Ridpath. Niece- Brittney Lane & fiancé, Christopher Davis. Special Great Niece- Peyton Davis. Step Grandfather-Roy Estep. Lots of Aunts, Uncles, Cousins and other Family. Lots of friends and his new Church Family. Roger attended Brush Arbor Worship Center. A memorial service will be held at 7:00 PM – Wednesday, February 26,2014 at the Bower Funeral Home-Chapel, Pulaski with the Rev. Carson Linkous and Brother Mike Dickerson officiating. The family will receive friends from Wednesday 5:00 PM until service time at Bower Funeral Home. (Come as you are and share your memories of Roger). To send your online condolences, visit www.bowerfuneralhome.com Bower Funeral Home, Pulaski is handling the arrangements for the Ridpath family.