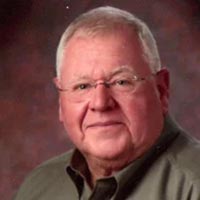 Harry Eugene Richardson, Jr., age 74, passed suddenly at his home July 14, 2020. Harry will forever be remembered and cherished by all who knew him, especially his wife of 50 years, Anna Marie Richardson; son, Christopher and daughter-in-law, Elizabeth; grandchildren, Robbie and Mary Elizabeth; half brother and sister-in-law, Ray and Charlotte; his mother, Evelyn; as well as nieces, cousins, and countless friends made throughout his life. He was preceded in death by his father, Harry Eugene Richardson, Sr.

Harry, known to many as ‘Richie’, was a lifelong native of Christiansburg, Virginia. He was a graduate of Virginia Southern College and served faithfully during a 17-year career with the United States Army Reserve as a First Sergeant. With his loving wife, Anna Marie Humphreys, he raised a family and worked in the community until retirement in 2012. His greatest loves came through time and making memories with his family and in meeting and knowing all people.

Harry served his community with dedication and care as a volunteer for several organizations. He was a member of McDaniel Lodge No. 86, a Scottish Rite Mason, and member of the Kazim Shriners. He worked with the local school system and its education and athletic programs, to include 25-years as the voice of the Blue Demon Football Team and at his church in a variety of roles. In recent years he served avidly as the President of Chapter No. 144 of Mended Hearts at Carilion Roanoke Memorial Hospital, bringing comfort, joy, and support to patients, family, and staff.

A man of many talents Harry found passion in gardening, art, music, woodworking, cooking, reading, and giving. He will forever be known for his love of sharing his life and many talents with so many that he met along the way who became friends.

A graveside service with military and Masonic Rites will be held at Sunset Cemetery, 501 S. Franklin St., Christiansburg, Virginia on Saturday, July 18, 2020, at 11 a.m.

In lieu of flowers, donations in memory of Harry Richardson, Jr. can be made to Mended Hearts (www.mendedhearts.org), Masonic Charities of Virginia (www.grandlodgeofvirginia.org), the Carilion Foundation (www.carilionfoundation.org) or to the charity of your choice.